Editing this collection of bystander intervention and deescalation resources is a challenge, because so many resources advise contacting law enforcement, when we know that the presence of law enforcement too often increases harm to targeted populations. Please be aware that while some resources here might advise "delegating" to law enforcement, readers would do well to consider the consequences, given what we know about state sanctioned violence and its escalation.

This is an amazing practical web tutorial on bystander intervention and deescalation tactics created by Jes Skolnik (with help from Rachel Sarah Levy) for this particular moment. I highly recommend starting here.

In "What To Do If You Witness a Bias Attack" on DNA Info, Rachel Sarah Levy describes some of the elements of intervention and deescalation she offers in her trainings.

The Quaker organization American Friends Service Committee posted these bystander intervention do's and don'ts, and includes a PDF version for download and printing.

United Against Racism, a European network "against racism, nationalism, fascism, and in support of migrants and refugees," offers this "leaflet" called "Who, If Not You? How You Can Intervene When Witnessing Racial Assaults."

MIT collected some ﻿active bystander strategies﻿, including "strategies in the moment" and "strategies after the fact."

Professor Eric Grollman wrote "A Call for Bystander Intervention to End Racism" in 2013. A basic primer on what this might entail.

Professor Imogen Tyler collected these UK resources for antiracist intervention after the passage of Brexit.

Many bystander intervention resources are for sexual assault, and are potentially adaptable to other forms of assault. Here is an extensive listing from the National Sexual Violence Resource Center, organized by categories. Here also is "Engaging Bystanders in Sexual Violence Prevention" by Joan Tabachnick, a booklet available for free PDF download that includes activities and information on how to effectively engage the bystander. (You might land in a publication index; just search "bystanders.")

Wo/Men's Resource and Rape Assistance Program has some good information, with the four D's of bystander intervention: Direct, Distract, Delegate, and Delay.

For comparison purposes, here is "Bystander-Focused Prevention of Sexual Violence" prepared by the White House Task Force to Protect Students from Sexual Assault in 2014.

Hollaback! here collects strategies for dealing with harassment, with useful graphics for those being harassed and for those who witness it.

The People's Response Team (Chicago) created this handy PDF of "Do's and Don'ts for Bystander Intervention." This can be used in conjunction with their training manual for those who wish to hold bystander intervention trainings in their communities.

Eleanor C. Whitney created this useful PDF of a one-page mini zine for bystander intervention and deescalation, based on a training by New York-based social worker Rachel S. Blum Levy.

An artist named Maeril created this comic for intervening in Islamaphobic harassment. ("Save images as..." and then print.)

Not necessarily related to intervention and deescalation directly, you can nonetheless get new downloadable and printable graphics from Just Seeds and also this Post-Election Idea Bank.

A one-page infographic by Brooklyn-based Marcela Lizeth, informed by the insights of queer and trans activists of color, on how one might intervene without calling the police. 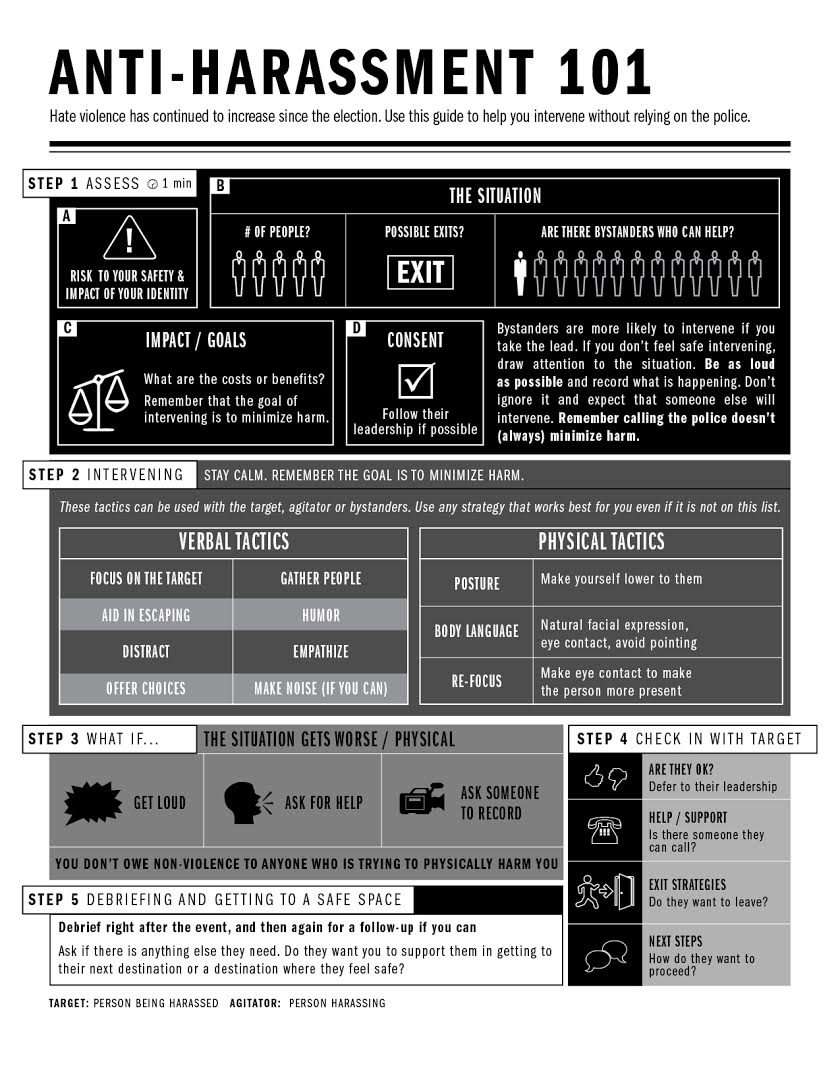 WNYC offers this short radio segment (accompanied with written text) about "What Should You Do If You Witness a Bias Attack?"
​

Barnard Center for Research on Women in collaboration with Project NIA developed a video (below) for an abolitionist approach to intervention (i.e., without calling the police), "Don't Be a Bystander: Six Tips for Responding to Racist Attacks."
​NOW THIS makes a video (below) with social worker Rachel S. Blum Levy about her bystander intervention and deescalation trainings, featuring some basic strategies.
​Buzzfeed made a video, as they are wont to do (below), based on Maeril's comic.
Here is a series of videos by independent consultant and psychologist Alan David Berkowitz about bystander intervention.

VideoRev made this video (below) in 2016 after Brexit: "Five Ways to Disrupt Racism."
This animated video (below) by Alyssa Hernandez includes three of the D's of bystander intervention: Direct, Distract, and Delegate (again, I would caution against "delegating" to police).
Deaf Planet Soul's Zaineb Abdulla posted this video to Facebook (with thanks to Chicago MMA), demonstrating how someone in hijab might escape someone who grabs her headscarf.  Deaf Planet Soul also offers a Hate Crimes Survival Seminar, including self-defense techniques as well as intervention and deescalation tactics.

THE PEOPLE'S RESPONSE TEAM in Chicago has developed these downloadable training manuals for Cop Watching 101 and Bystander Intervention 101, and hold local and virtual workshops.

STOP STREET HARASSMENT focuses on gender-based incidents, which will no doubt escalate in the age of "grabbing pussy" as presidential mandate.

The AMERICAN CIVIL LIBERTIES UNION offers this app in some states called Mobile Justice, which allows bystanders to document police violence on their phones, and send the footage immediately in case of confiscation. Here is also their #reporthate form to report incidents of assault and violence nationally.

The NATIONAL NETWORK FOR IMMIGRANT AND REFUGEE RIGHTS has a "live" list of post-election immigration resources.

This Google form, created by Kayla Santosuosso at the ARAB AMERICAN ASSOCIATION OF NEW YORK, offers a useful template for organizing safe walks or rides for populations likely to be targeted.

The LESBIAN AVENGERS HANDBOOK is a useful blast from the past for organizing direct actions.

At Medium, Mikki Halpin created this "live" list of other actions we can right now. You can also subscribe to Wall of Us's WEEKLY ACTS OF RESISTANCE.

​INCITE! offers some resources for organizing beyond intervention and deescalation.
Proudly powered by Weebly